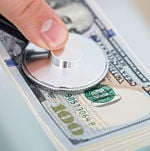 All doctors know EMR is a pain and a leading cause of physician burnout ...

.. but few of us grasp the the depth of the depravity in the Electronic Health Industry until now.

New investigative reporting is shining the light of day on a backwater of fraud, cheating and lies that surrounded the roll out of EMR starting in 2009.

Starting that year, $38 Billion dollars in subsidies for installation of EMR software and attestation to its "meaningful use" have been allocated by the federal government. The response of the EMR industry to that size pile of money was equivalent to giving a school of great white sharks the carcass of a dead blue whale. A similar feeding frenzy ensued.

A significant portion of the EMR industry's response to these stimulus funds appears to have been illegal, harmful or both.

New reporting by Fortune Magazine and Kaiser Health News is collating all the settlements and whistleblower cases into one article so we can all witness the Soprano-style attack on this facet of our healthcare industry.

Turns out some players in the industry constructed a maze of fraud, lies and kickbacks - to the tune of billions of dollars so far. (Tony would have been so proud)

That's right, multi-million dollar systemic and protracted cheating and lying in the EMR industry - already caught, prosecuted and settled for over a billion dollars in fines and claw backs to date

Whistleblowers, doctors and hospitals have filed lawsuits alleging that some electronic health records (EHR) software used in hospitals and medical offices has hidden flaws that may pose a danger to patients — and that a substantial chunk of the $38 billion in federal subsidies went to companies that deceived the government about the quality of their products.

Beyond those cases, federal officials have paid hundreds of millions of dollars in subsidies to doctors and hospitals that could not show they were even qualified to receive them, according to federal officials.

Program flaws that can cause patient harm

HHS Office of the National Coordinator for Health Information Technology, or ONC is the body that sets EMR certification standards.

And in a final mind-blowing statement, the article provides this simple bullet point:

ONC officials said they keep no log of complaints they receive.

Yup, there is no record of the number and nature of the complaints they receive about EMR, kickbacks, illegal payments and fraud if it does not rise to the level of a whistleblower suit.

I encourage you to read the article and check it against your experience of EMR installation at your facilities.

Here is the full article:

If you now see you have a whistle to blow ... you would be adding to a legion of similarly concerned doctors.

I am personally knocked speechless by the magnitude of this evil.
Your thoughts?