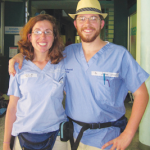 One of the most common stressors of docs in our so-called health care “system” is the sheer toxicity of full time hours. While most of the rest of the world considers full time to be 40 hours a week. We all know a full time doc starts at 80 plus … if you include all the hours you must be available on call.

In physician surveys, schedule flexibility and the ability to function as a part time doctor are always sited as a highly desired burnout prevention measure. However, until recently, the ability to actually BE a part time doctor in a group of full-timers was limited, frowned upon, looked down on and maligned … not to mention the fact that part time slots used to be hard to find. Times are changing.

Part time doctor … is a status that is becoming MUCH more popular in just the last several years … as evidenced by the American Medical Group Association’s (AMGA) and Cejka Search 2011 Physician Retention Survey. The 2011 survey covered 14,366 physicians in 80 practices, which had from three to more than 500 doctors each.

The numbers are staggering with part time male doctors tripling and female part timers increasing by 50% in just the last six years. I believe we are seeing the emergence of a NEW NORMAL.

Here are the actual percentages:

The Mushrooming of the Part Time Doctor

Two demographic forces are driving this part time doctor trend – and I suspect a third is working in the background as well.

1) More Women Physicians in the workplace.
The balancing of the genders in our profession. In my experience, women have a healthier perspective on the stress of full time work AND they graduate residency to prime years to start a family … voila … a higher demand to be a part time doctor.

2) An aging population of Men Doctors
These men are looking to scale back their practice to be a part time doctor rather than retire. The economic crash of the last several years has definitely slowed physician retirements that is for sure.

I will call it the emergence of the “NEW NORMAL”

Back in the day when women first started to show up in medicine and began to legitimately request a part time doctor option for their participation … we all remember the grumbling from the old guard.
“Why do we even let ‘em into medical school in the first place”
“We don’t hire women here because they go part time sooner or later”

If the truth be told, I still see this grumbling in online doctor-only sites where the MD can remain anonymous. That was the OLD NORMAL. Work like a dog, until you die … full time or nuthin’ … if you can’t hack it you simply weren’t tough enough and didn’t deserve it. (I KNOW you have heard similar if you are over the age of 45 or so ..)

Now our doctor sisters are creating this NEW NORMAL … where it is all of a sudden OK to be a part time doctor, to put your family first for a while, to have a life! AMAZING.

So with the “New Normal” of the part time doctor option becoming just PLAIN NORMAL … both women and men can go part time to raise a family, as alternative to retirement … or in any other situation where a lower work load would support a higher quality of life.

This New Normal can be a part time doctor — balanced and healthy and empathetic  … everything you might have imagined your life could be when you made the decision to become a doctor in the first place.

Makes total sense … and I welcome EVERYONE to define your own New Normal.

One of the keys to this whole cascade is the ability for everyone to be OK with you being a Part Time Doctor.

And it looks like this acceptance of the part time doctor as a valued member of the medical group is reaching critical mass. Here’s how I can say that.

The same survey showed
75% of groups in 2011 offered a four-day workweek, and 30% allowed job-sharing.

If you have an opinion on this “spin” of mine … please scroll to the bottom of this page and leave a comment. Let’s get this NEW NORMAL discussion rolling.