Two surveys in the last three years show a remarkable transformation of the US physician population.

With this gender shift in full swing, you would think unconscious gender bias against women would be rolling towards extinction ... right?

Not so in my experience (and yours too I suspect).

Conscious and unconscious gender bias are most often based on male behavior. The bias is best eliminated when men step up and change their awareness and behavior going forward. So in live trainings, I direct the following comments to the men in the room. They often don't take it seriously until they look around and notice the avalanche of nodding from the women physicians sitting around them.

Let me show you three simple things male physicians can Stop Doing to dramatically reduce the unconscious gender bias in your workplace. 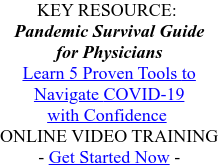 DISCLAIMER:
I am not addressing CONSCIOUS gender bias in this post - overt sexism, misogyny and gender-based abuse coming from workplace psychopaths will not be covered below. 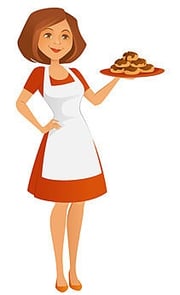 Unconscious gender bias is a tilting of the playing field of expectations whenever men and women are mixed in together. We expect women and men to play different roles, even if the women and men are all doctors.

In a mixed gender workplace, the men will naturally and automatically ask the women inappropriate questions. The questions I am talking about are probably not the ones you are thinking about right now however. Here is an example of the kind of questions I mean.

"Cheryl, it's Mary the receptionist birthday next Tuesday. You are going to bring cupcakes, right?"

This is an inappropriate question for one simple reason.
Dr. Thompson would never ask this question to a male physician colleague. This is unconscious gender bias.

Dr. John and everyone else in the office also holds an unconscious assumption that Dr. Smith will answer in a specific fashion. What are they expecting her to say?

Correct. Everyone assumes she will say YES.

Correct. Because she is a woman, pure and simple.

And if she doesn't say yes ... well that is where the "B" word comes in. Read all about it in our first gender bias post here.

Your request puts her in a bind that immediately effects her reputation with everyone who hears her response. You are asking her to choose between being a "nice girl" and physician leader of a clinical care team. If you don't choose option "A", you are quickly labeled a "B" (rhymes with "itch") and that label almost never washes off once it is applied.

The first thing men can do to end this kind of gender bias is this:

If you want cupcakes ... buy or bake them yourself.

I gave a specific example of cupcakes for a staff member's birthday above. That is an obvious one, a common one and one that makes men often feel quite uneasy.

The inner dialog can go like this, "Wow, if I can't even talk about cupcakes without stepping on someone's toes ... what else am I not supposed to say?" 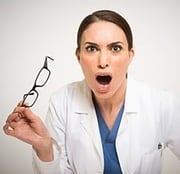 That's where the Bias BackCheck comes into play.
It is quite simple and it goes like this.

If you are about to ask a female colleague to do something/anything - STOP and ask yourself this question:

"If I were talking to a male colleague, would I ask them to do this?"

If your answer is "No", then don't ask a woman either.

Figure out some other way to get your needs met. 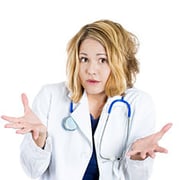 How do you introduce your female physician partners to other people? Do you call them doctor, using their formal title, or do you instead introduce them by their first name?

Head's up: when you introduce your female physician colleague to a person they have never met before with their first name instead of their title, here is what happens ...

The listener's unconscious gender bias naturally kicks in to gear. They immediately assume this woman is NOT a doctor, because you didn't introduce her as one.

Someplace in your subconscious, you don't see her as an equal or you would have introduced her as a doctor just like you. That is YOUR unconscious bias. She may be presumed by the patients, family and staff to be a nurse at best, but certainly not a physician - unless you call her "Doctor".

We all know this first naming bias happens and it needs to stop - NOW.

I will show you a research report below that conclusively documents how ingrained this biased speech pattern is -- even when academic experts introduce each other to audiences in formal meetings.

Despite the frequency of this shaming event, the solution is very, very simple.

DO NOT INTRODUCE YOUR FEMALE PHYSICIAN COLLEAGUES BY THEIR FIRST NAME - EVER AGAIN.

This is a subtle and very powerful slap down to women physicians. Their first name intro instantly establishes them as second class citizens, beneath the status of the real doctors in the room.

It often goes like this ... even in introductions of participants in a Panel of Experts in major academic institutions - especially where the person doing the introducing is a man:

Here is a recent study on this phenomenon. Their findings from observing introductions at Internal Medicine Grand Rounds at several academic centers in the US are striking.

If this pattern of first-name-shaming female doctors starts during their onboarding into a new position, the staff often picks up it and calls the doctor by her first name too.

This can lead to the WITDCI Syndrome.

This is where your female physician colleague gets to the end of a 20 minute office visit and the patient looks her in the eye and asks, "When Is The Doctor Coming In?". That is a setup, dear reader.

ALWAYS introduce your female colleagues by the title of Doctor.

After the introduction, if she would prefer to be called by her first name, she can say so herself. Now that everyone knows she is a doctor, she can choose how others address her.

There you have it:

1) If you want a cupcake, bake or buy it yourself.

2) Never ask a woman to do anything you would not also request of a man.

(2) The healthcare future is female

How would it feel if you could stop these three common gender biased behaviors in your workplace?

What other gender bias busting behavior changes have you seen make a difference on your teams?