Physician Wellness – Saying “NO” to Endless Hours and Solo Practice 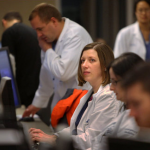 Physician Wellness and a satisfying medical career mean saying “no” to endless hours and solo practice for many younger physicians.

Here is a story from the New York Times about a Father-Daughter pair of doctors who talked about working together while she was in training … and now she has accepted a salaried ER position 2 hours from home, much to dad’s disappointment.

“My son and I had deeper feelings for our patients than I think Kate will ever have. I’ve had three generations of his family under my care,” he said as a waitress brought his usual Diet Coke without being asked. “Kate will never have that.”

The article goes on to point out …

“Younger doctors are deciding that the personal price of being at their patients’ beck and call is too high, while acknowledging that teams of doctors can offer a higher quality of care. So they are embracing corporate, less entrepreneurial and less intimate roles in part for the uninterrupted family time they bring.”

I can totally understand all these trends as healthy move for most who choose medicine as their career path. The all consuming medical career was never healthy for the provider or their family … and the trickle down in many cases is patients can’t connect with their doctors as much as they would like either.

This excellent article finishes with a paragraph noting the dramatic influence of women (and pregnancy) on Residency
Training.

“Pregnant residents are another sign of medicine’s shifting culture. Residency hours and practices were once so grueling that few doctors deliberately became parents during those years. But in an effort to reduce fatigue-related errors, residency hours were reduced in 2003 to 80 per week. Last year at Johns Hopkins, the birthplace of the residency program, more than a third of the women in one internal medicine residency program became pregnant or were the mothers of young children — an outcome that would have been unimaginable to William Osler. “

Here’s a link to the full article: