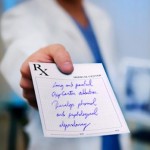 The Associated Press reported this week the Los Angeles County District Attorney has charged osteopath Hsiu-Ying “Lisa” Tseng with second-degree murder after three of her patients died of overdoses of prescription pain medication.

According to court records, Tseng allegedly wrote an average of 25 prescriptions for painkillers per day, adding up to more than 27,000 prescriptions over a three-year period starting in January 2007. In 2010, the DEA finally recognized the pattern here (DUH!) and managed to suspended Tseng’s license to write prescriptions.

Tseng was eventually charged with the deaths of three patients, all healthy males in their 20s, and arrested this week after voluntarily surrendering her license to the Osteopathic Medical Board of California.

She is facing second-degree murder charges, based on the legal theory of “implied malice.” In the context of this case “Implied Malice” means she knew that her prescriptions could have a deadly result, because others in her care had died previously.

Here’s a quote from James Acker, a professor at the School of Criminal Justice at the University of Albany, SUNY, who is not connected with the case

“Where you are knowingly engaging in risky behavior, and it’s likely that an adverse consequence such as a death will result, that’s sufficient to consider it homicide,”

Please leave a comment and tell us what YOU think!