Disney Anti-Obesity Exhibit Shut Down after “flood of complaints” 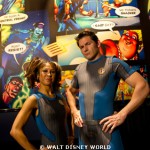 Potentially a cool idea eh? Potentially is the operative word here because they pulled the plug on the exhibit very quickly. It actually didn’t survive until its official opening date.  Ouch.

Here’s what the Orlando Sentinel said caused the flame out

“A flood of complaints, particularly from obesity experts and related organizations, said that the exhibit was counter-productive with themes of bullying and shaming peppered throughout the messages.”

“A video of the exhibit, which to me seems like a glorified video game, shows two characters trying to recruit visitors to fight “bad habits” and “inactivity” by destroying as many empty calories as they can. The ammo? Fruits and vegetables. The target? Bad habits. The biggest villain of them all, according to the characters Will Power and Callie Stenics leading the game, is Lead Bottom. So Will and Callie invite exhibit visitors to engage in “positive peer pressure” and a dance-off with the weighty villain.”

Blue Cross spokesperson John Herbkersman is quoted in a Reuters article as saying:

“Our goal is to ensure that the attraction conveys a positive message about healthy lifestyles in a fun and empowering way. To work on further improving and refining the experience, the attraction is closed for the time being. We look forward to officially opening it soon.”

Given the prevalence of obesity in the US … it will be hard to address it in a theme park fashion without upsetting someone along the way. Better luck next time.