Healing the Healers: End the Battlefield Mentality and Support Your Colleagues when They Need it Most 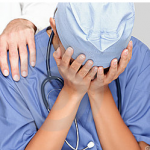 Healing the Healers … My Story …

The mother of the dead baby sat in her husband’s arms and simply asked “why?” over and over through the Vietnamese interpreter. I had no way to answer the question. I didn’t know why. There was nothing to point to. No defect in the child or mother or the actions taken in L&D.

All I could do was say “I am so sorry” … for your baby, for you … for everyone involved.

It was a nightmare … losing a baby during childbirth in my family practice residency. It was THE thing each of us dreaded the most. What happened afterwards was even more devastating in the long run. What happened was … nothing.

It had been a normal evening  on call.

The family practice residents ran our community hospital. I would end up delivering over 250 babies in my two years here. It was just before midnight, three women in labor, I had just changed out of my clothes into green scrubs and the typical long white jacket.

As I walked past the first labor room on the left I heard an obvious deceleration on the external monitor. HR dropped from 140 to less than 60 for almost a full minute with what looked like a late pattern. The mother was a Hmong woman who did not speak English. This was her third child. No previous problems in childbirth.

She was doing just fine. Dad was standing by the bed in the half light of the labor room. Everything was quiet – that’s how I had heard the deceleration. The night shift had just come on. A calm scene really, except for the yellow light of my nerves jangling from the deceleration.

Exam showed her to be 7 cm dilated, head well applied, normal contraction pattern. The decelerations continued. Protocol called me to rupture the membranes and apply a scalp electrode. I opened the amnion hook, had the nurse stabilize the external monitor puck and apply some fundal pressure. The father held the mother’s hand as they spoke quietly to each other in a language I couldn’t understand.

I ruptured the membranes – a small amount of clear fluid. The heart rate dropped immediately to zero as if it had tipped off the edge of a table and fallen to the floor. 140 – 60 – 20 – nothing. Vaginal exam showed no prolapsed cord, no bleeding or any other abnormality. I was the only doctor in the hospital. The OB attending was 15 minutes away.  This baby needed to be out right now.

With much shouting to push, my fingers completing the dilation of the cervix and good cooperation from the mom … we had the baby out within three contractions.

No nuchal cord, no abruption, no blood anywhere … the child was normal … except it had been without a heartbeat for almost 5 minutes at this point. Full resuscitation. Epi down the tube. Chest compressions. Nothing. [Heart breaking. Are we getting anywhere? I do not want to call the code and give up.] Suddenly, five minutes of chest compressions and two doses of Epi in … we have a heartbeat at 160. [Hallelujah] Stop the chest compressions. Let’s tape the tube and call the NICU in the big city down south.

As the nurse and I begin to breathe again … I feel a gentle tap on my shoulder. The father is standing next to me and points at my left hand. I notice that this whole time – as I stabilize the ET tube and the child’s head – the tip of my left pinky has been touching the baby’s open eye. I thank the father, change my grip and close the upper lid. I begin to realize this heartbreak of the last 20 minutes is only the beginning.

We got the call three days later. The child showed no signs of brain activity and the ventilator had been turned off. I released the breath I had been holding since that night in this moment of final recognition. The baby was dead. That is NOT supposed to happen to anyone … ever. Not to the baby, not to the family and not to any Resident.

The director of the residency program and the OB staff held a case review. No “fault” was found. Procedure had been followed. The baby’s post mortem was normal. All actions were deemed “appropriate”. I was not to blame. That was very little consolation. The baby was dead. My mind ran over and over the events like a gerbil on a wheel.

A little piece of me died that day. Deliveries were never the same joyful wonder they had been before … they were bullets to be dodged. For years and another 300 deliveries I would occasionally be jolted awake at night by a vision of an amnion hook with a trigger on it.

In the days and weeks afterwards … it gradually dawned on me that something I had always taken for granted … was NOT happening.  We were a small residency … only 8 of us running our community hospital. It felt like a family. I had always assumed any tragedy would be met by a rallying around the unfortunate resident.

Here was our collective worst nightmare … and … nothing happened. Nothing except the case review and my meeting with the family – both agonizing experiences where I was by myself. I felt tainted, like a failure, an outcast in the wilderness.

I don’t blame anyone. I am certain the first reaction among my colleagues was … “OMG it happened”.

Followed by, “thank GOD it didn’t happen to ME.”

Most of the physicians I have worked with have their own version of this story; something bad that happened followed by complete isolation.

It has hurt us all.

Let’s vow to end this compounding of the natural tragedies that occur in our profession. Losing a baby is bad enough. Coming away from the experience feeling that no one really cares and we are all on our own in the end … is a wound on a wound. This does not have to continue. We do not have to let our own fear stop us from supporting our colleagues in their hour of greatest need.

If you are still reading this article, I want you to know something with crystal clarity. Your Physician Colleague who suffers a bad outcome wants you to come and talk with them. Sit and have coffee, put a hand on their shoulder. Make them a “hot dish” so they don’t have to cook for a couple days. (I am from the upper Midwest … that’s just what we do) Do it again and again until they say, “enough already”.

There are some stories even our significant other and parents can never understand … only another doctor can fathom the feelings. The next time tragedy strikes in your medical community, reach out to your sisters and brothers in our community. PLEASE don’t run from them because of your own discomfort. They are not contagious, nothing is going to rub off on you.

Don’t let the natural “battlefield mentality” win out. Notice it and act in spite of it. It will make a huge difference to your friend. I promise.

This is the time when you can step up and pay it forward. Just be there … when it counts the most. Play a part in healing the healers. You never know when you will desperately want them to do the same.

Here is a lovely poem on healing the healers written by a 10 year old … from the mouths of babes.